Fri 31 Oct
The Merkavah 09 group had just about assembled in the hotel in Jerusalem. The bulk of the party had just arrived from Buenos Aires, doubtless in even more need of showers, food and rest than the rest of us, who had got there a bit earlier. However - no such luck - this is Merkavah! We were ushered into the bus and whisked back along the road to Tel Aviv, past the airport which most of us had not long since arrived at, and on to the Israeli Air Force Theatre in Herzliya.
In what turned out to be the first of many inspired changes of schedule, we were on our way to see a concert by the Idan Raichel Project - much better for our souls than a shower, food or a rest; they could all wait, our souls needed immediate attention.
Idan Raichel has gathered together a group of musicians and singers who between them represent many of the communities who live in Israel. They play in a wide range of styles, and sing in more languages than any of us could name. The are currently amongst the leading lights of Israel's popular music scene, and many of the audience were singing along to many of the songs, and not just in Hebrew, but also in Arabic and what I took to be Amharic, the language of the Ethiopian Jews, as well as  French and Spanish.
Pablo and Frida were ahead of the game, as usual, and had incorporated several of Raichel's songs into their dance programme. Todas las Palabras in particular was a firm favourite:
The song was written by Colombian singer Marta Gómez, who sings it on the record (and in this videoclip); in the concert that we saw, it was performed by Ethiopian singer Cabra Kasai (see this short concert clip).
Here's a stunning, passionate song sung in Hebrew, Arabic and Amharic (I think, but I could be wrong on all three) from a concert in Leuven (Belgium) just 4 weeks before we saw them:
I'll try to check which song it is - but I may have to go through all the CDs to find it . . .
Posted by Michael Shade at 18:53 No comments: Today, 27 January, is International Holocaust Memorial Day, commemorating the day in 1945 that Allied troops captured the Auschwitz concentration camp. This painting was Jan’s initial response to our visit to the Yad Vashem Holocaust Memorial Centre in Jerusalem. See the post she has written today on her Jubilación blog.

The Memorial Centre commemorates the 6 million Jews who were murdered by the Nazis in the biggest, most organised and most cynical attempt at mass extermination in human history.

The existence of the concentration camps, and the full horror of what they had been used for, only became apparent to the rest of the world in the last few months of the war as the Allies captured them one by one, and discovered the incinerators, the mass graves and the few helpless survivors. The memorial centre documents Jewish life in western, central and eastern Europe through the centuries, up to and including the Nazi régime.

From 1933 onwards the Nazis brought in measures banning Jews from the professions, from public office, from publishing, from commerce, and from education. They encouraged violent attacks on Jewish people and property including public beatings and humiliations and the burning of homes, shops and synagogues. They forced Jews to wear an identifying yellow star, forced them out of their homes and crammed them into ghettos, confiscated their property, then deported them to forced labour camps and concentration camps and finally murdered hundreds of thousands if not millions in gas chambers.

So Yad Vashem, which documents all this, is truly shocking.

The visit
The Centre displays original pieces such as photographs, letters and personal items such as clothing, which are particularly touching because they relate to individual, often named people. It also reconstructs a number of scenes including ghetto streets, the cattle trucks in which people were transported to the camps, the bunks in which people were crammed 3 to a bunk 3 tiers high.  All bar one or two items in the Centre use original materials, so you walk down a reconstructed Warsaw Ghetto street, and you stand before one of the cattle trucks and try to imagine how hundreds of people could have been forced into it and shunted off to certain death.

The most affecting part for me was the final area, the Hall of Names, where, after you have seen the exhibits and reconstructions, read the panels and listened to the guide, you enter a domed hall in which the names of all known victims of the Holocaust are recorded, hundreds of photographs are displayed, and files kept documenting what happened to at least some of them. Looking at the photos here and elsewhere in the Centre, I kept seeing myself in the little boys and young men, and my parents, grandparents, uncles and aunts - sometimes it would be a likeness, with others it would be the look in a person's eyes, or the pose they struck. It could have been me; it could have been us.

The Centre houses an enormous amount of material, and the guide very sensitively took us round a selection of exhibits for the best part of two hours, explaining and answering questions in a very straightforward manner. For some members of our group it was the first time they had been in a position in which they had had to confront such horrors.

Amongst other visitors while we were there we noted two groups of people in their late teens or early twenties - a group of Arab (Palestinian?) students, and a group of Israeli soldiers in uniform; the members of both of these groups looked and sounded as numbed and shocked as we did.


As for myself, I had visited Buchenwald and Majdanek concentration camps on visits to Germany and Poland when I was their age, in the 1960s; I cried then and I cried again at Yad Vashem.

I found myself responding on several levels, both during and after the visit. Each brought up an array of unanswerable questions.

Then, as a Jew, born in England during the war - what if I had been born elsewhere? In Germany, say?  How can a persecuted group respond to such persecution? Could this have happened in the UK? How does all this affect my own sense of Jewish identity?

Finally, as the particular individual that I am - what happened in the areas of eastern Poland and Belarus from which my grandparents came to the UK over 100 years ago? Were any members of my family still there during the years of occupation and war? What happened to them? Did they survive? Where are they now? How can I find them?

--------------------------
NB: The Yad Vashem website has an enormous collection of information and documents on the Holocaust, including images and media items, which hugely extends the range of material available in the Centre itself.

Posted by Michael Shade at 23:38 No comments:

Some of Jan's poems and pictures. If you find it difficult to read, use Fullscreen (above text) and Zoom (below) to adjust the size.

Posted by Michael Shade at 22:27 No comments: 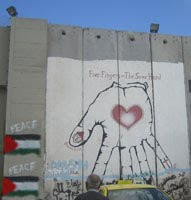 On the way back to Jerusalem from Bustan Qaraaqa we went through the Separation Wall at the Gilo checkpoint in Bethlehem. It took us an hour of standing in line, in a zigzag cage to the entry point. We were unlucky in that we’d forgotten it was a Friday and people would be wanting to go to Jerusalem, from the West Bank, to the Al Aqsa mosque for Friday prayers. We were lucky in that it can take up to 3 hours. Peace be upon Us All.

Once through two turnstiles (a fraught experience as people get stuck in it as the gate locks, only letting a few through at a time) we were hauled out of the queue by soldiers to go through the X-ray machine as tourists. Once on a 241, we got back to J’salem, and into the souk…

See the Slideshow from the checkpoint.

Posted by Michael Shade at 21:49 No comments: 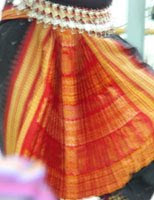 This was an altogether surprising session, with Yuval Cohen. As our coach (as always very late!) picked its way through the back streets of Tel Aviv, we passed a building with huge windows – I (Jan) saw a person standing at the window, with a body expressing boredom and frustration in equal measure… as the coach did a U turn, I realised this was where we were heading, and he – for it was Yuval – was our guide through the rhythms and the gestures of karnatic dance. Only one person in our party was Indian, and even she wondered what this was about!

For me, Yuval was the re-embodiment of Lindsay Kemp (I was going to say re-incarnation but I’m convinced he’s still alive!) in terms of body shape and mass, facial expression and gesture, style and lightness, strength and grace, costume, decoration and his mesmeric quality… and outrageously camp, of course! An inspiring afternoon.

See the Slideshow of the workshop.

Posted by omaoilreanail at 21:14 No comments: